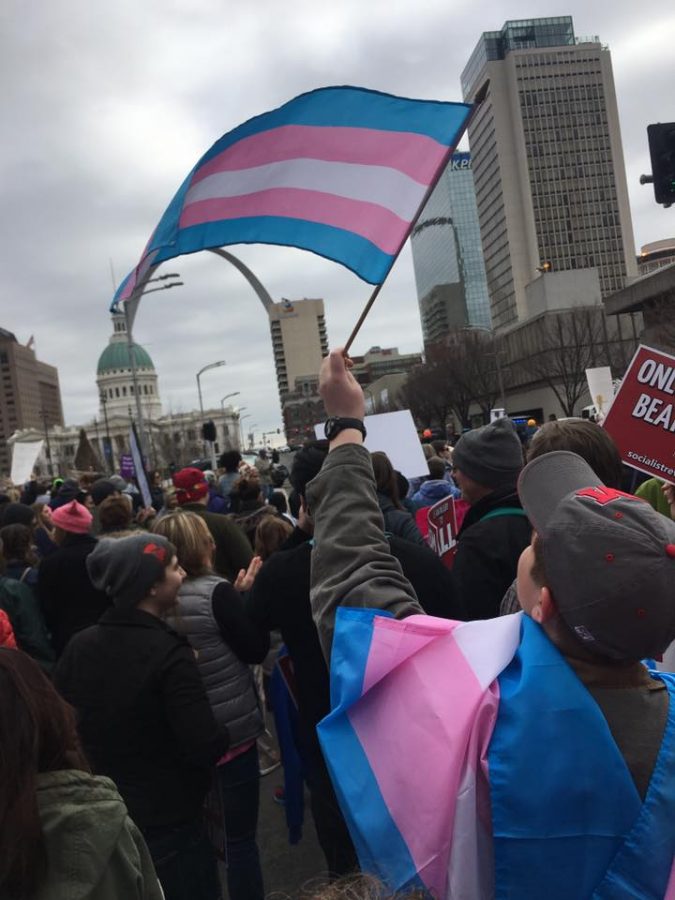 The scene in downtown St. Louis at the January 20 Women's March.

My sister texted three weeks ago that she wanted to attend the Women’s March in St. Louis, and that I needed to go pick her up from Jacksonville so we could go together. I was reluctant to agree at first, but I had always wanted to go to a march. We decided that our signs should be humorous because those are always the kinds of signs that go viral online. I quoted a Spongebob episode for mine, reading, “How many times do we have to teach you this lesson, old man?!”. My sister quotes Princess Leia’s insult to Han Solo but with the President’s picture in the middle. We planned to carpool with some friends including Maddie Brown, so we wouldn’t have to drive back in St. Louis traffic. I was excited after the planning phase, and was ready yet nervous for the next phase; the actual march. After being picked up and getting to the parking garage, we got a tad bit lost downtown trying to find Union Station. We ended up making it to Market Street and merging in with the crowd. We were in the front, surrounded by chanters and angry yet civilized women, men, and everything in between, shouting and carrying signs. There weren’t only humans marching, but dogs as well. These proud puppers displayed signs and pink hats with cat-ears, strutting beautifully down the road with charming smiles and bouncing floppy ears. The women leading the march would continuously pause the crowd for a moment and start a chant, with the crowd responding to the phrase. I was fully immersed in the barrage of signs, flags, and the passionate activism of the people walking beside me.

As the weather grew more humid, the crowd became stronger in conviction and larger in size as people from the sidewalks, some who were simply walking down the street, joined in with the crowd. Children in the windows of the buildings passing slowly by waved at the marchers down below, and the marches waved back in return. I was stopped many times by people asking to take a picture of my sign, addressing me politely with hopeful smiles. The people I interacted with at the march were far politer, in my experience, than any person I have interacted with at this school or this community. The stigma against people who get off their butts and protest is ridiculous, because the people I met at the Women’s March and others I know who have protested bigotry and injustice in the past are not dangerous, thugs, or rude in nature. Those who demonstrate against injustice are simply trying to make a difference in their communities and in their nation. The only rudeness and brazen aggressiveness I encountered at the march came from one counter-protester. He carried a sign with the image of a photo-shopped dead embryo that was inaccurate and inappropriate for a crowd consisting of many children. He began yelling at the marchers and moved in front of the leaders to begin shouting at them. A man near the front raised his Planned Parenthood sign to block the counter-protester’s image, and was met with cheers and approved chants. The counter-protester continued to tag along on the sidewalk beside the march, but was soon overcome with annoyed women who chased him away from the speaker’s stage near the Arch.

The speeches given by the speakers were moving and heartfelt. One woman gave a simple phrase to follow, “Stay woke, get yoked, go vote!” By staying “woke”, you keep yourself informed on important issues such as reproductive rights, women’s equality, Trans* rights, and the injustice against people of color. By getting “yoked”, which means “to tether”, you get involved with organizations that help oppressed peoples and stand up for the issues you care about. By going to vote, you tell your representatives that you won’t back a candidate who denies progress and continues injustice against oppressed peoples. If you are 18 years-old, it is your civic duty to go vote. There’s no excuse to not vote as a young person with more time on your hands. If you don’t like any of the candidate on the ballet, write someone in. Do your research and don’t be lazy, get off your butt and get registered to vote at your local DMV or post office.

The next speaker was a mother accompanies by her young child, saying that white feminists need to do better within the movement and rally for their sisters of color. She explained that if you teach your child about school segregation, you must also tell your child about red-lining and how the wage gap between people of color and white people keeps people of color out of communities that can afford good schools and teachers. These words were inspiring and eye-opening. I have realized that as a white feminist, I must do better to stand up for those I claim to support through action, not just through social media or through what I say. What’s most important, if you want to make a difference, is action. What you do says more about your character than what you claim to believe. It is high time for more people to “stay woke, get yoked, and go vote”.