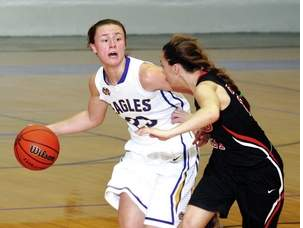 The 1,000 point club is hard to get into—only six girls from CM have earned the right to call themselves members. And no one has reached this milestone as fast as sophomore Allie Troeckler, who hit 1,000 points earlier this week.

Troeckler needed 4 points in the game against Mascoutah. With 6 minutes left in the 1st quarter, Troeckler put up a mid-range shot. As soon as the ball went in, it was announced that this was her 1,000th point. The whole gym than gave Troeckler a standing ovation with lots of applause. Troeckler said she never saw any of it, because she was playing defense.

“I’m pretty excited to have reached 1,000 points, especially as a sophomore,” Troeckler said. “It was definitely in the back of my head, but my scoring can’t be the main focus when I play. I score to help the team win, not to earn all the praise.”

Troeckler’s goal is to play well as a team at the upcoming regionals. She won’t have to worry about the record for a little while. Katie Broadway has the record for the most points in school history at 2,079.

“I just try to always go out there and play to the best of my ability, knowing that I’m not playing for myself, but for the team and for all the fans and especially the young girls who look up to us.” Troeckler said she wants to show young girls how to act on and off the court.